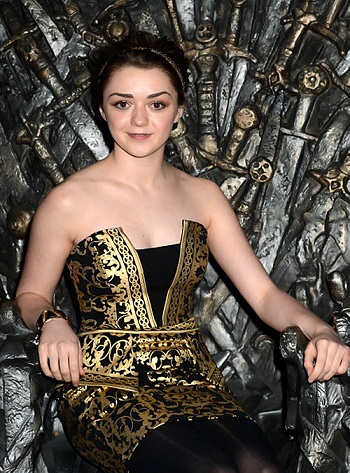 "As an actor, you're constantly looking to be pushed."
Advertisement:

Margaret Constance "Maisie" Williams (born 15 April 1997 in Bristol, England) is a British actor. Her first role outside of school theater has been as Arya Stark on the HBO series Game of Thrones. Her standout performance has received considerable acclaim, especially in light of her rather short resume, mixed with the extremely heavy material and experienced actors she's had to work with.

She also was in Cyberbully (2015). She was also announced to play the lead role in the indie silent film Corvidae (look at its indiegogo entry here

In 2015 she had a recurring role in Series 9 of Doctor Who as Ashildr (AKA "Me"), a girl from a Viking village. She's appeared as Lucy in The Film of the Book of iBoy in 2017. In 2018, she had a voice role in the animated film Early Man. She also stars as Wolfsbane in 2020's The New Mutants, based on the Marvel Comics of the same name, and as Scottish hacker Cameron MacCloud in Rooster Teeth's 2019 anime series gen:LOCK.