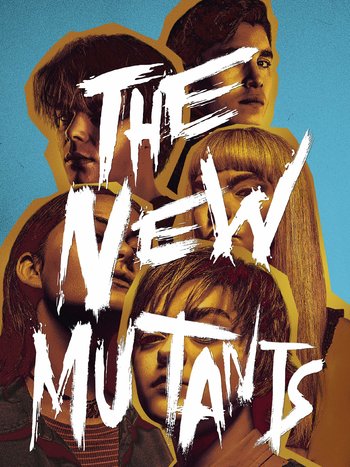 Everyone Has Their Demons
"Did you know that baby rattlesnakes are more dangerous than adult ones? They haven't learned to control how much venom is secreted. All of you are dangerous. That's why you're here."
— Cecilia Reyes

The New Mutants is a teen Sci-Fi Superhero Horror film. It is the thirteenth and final installment of the Fox X-Men film series, the last Spin-Off and the only film in the series released under the 20th Century Studios banner. As the name suggests, it is an adaptation of the New Mutants comic book series (and, specifically, the "Demon Bear Saga"). Josh Boone, of The Fault in Our Stars fame, directed.

It revolves around five young mutants who are just discovering their abilities being held in a secret facility against their will. When they learn of what secrets this certain facility has, they must fight to escape their past sins and save themselves. As they relive their origin stories, their memories turn into terrifying realities. Soon, they question what is real and what isn’t, and it becomes clear that the institution isn’t what it seems.

The New Mutants holds the distinction of being the last movie in Fox's X-Men series to be released chronologically, as the long-running series was confirmed to be ending after Disney's acquisition of the company in favor of integrating the Mutants into the Marvel Cinematic Universe. The film itself was subject to multiple delays due to Fox considering extensive reshoots that never occurred (in part due to limited availability of the cast), and was further pushed back by Disney's acquisition of Fox, though the final film is in-line with what director Josh Boone sought to make. The film finally arrived in theaters on August 28, 2020.

In spite of being the last movie produced by the old guard, its predecessor Dark Phoenix was treated as the Grand Finale for Fox's X-Men films overall. Due to the delays, Dark Phoenix was the last movie released under the 20th Century Fox logo; thanks to the rebranding of the company as 20th Century Studios, The New Mutants is also the sole production from the Marvel-Fox braintrust to release under the new label.

The New Mutants contains examples of:

"My father used to tell me inside every person there are two bears. One bear is all things good; compassion, love, trust; the other is all things evil; fear, shame and self destruction. I asked him: which one wins? He answered: "The one you feed."