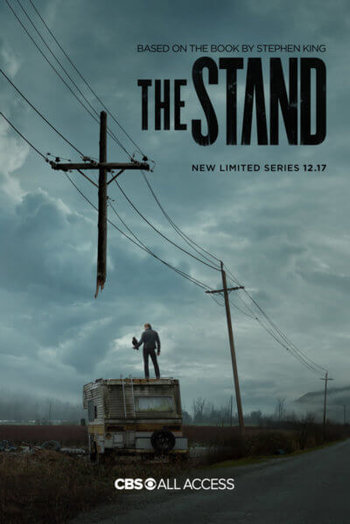 After the world ends, the true battle for survival begins...
"There's bitter days ahead—death and terror, betrayal and tears—and not all of you will live through 'em. The Dark Man grows stronger all the time. I know you feel it, too. Soon he'll come, to destroy all who stand against him. His kingdom's in the West, and there you must go and make your stand."
— Mother Abigail
Advertisement:

The Stand is an American epic Dark Fantasy web television miniseries, based on the 1978 novel of the same name by Stephen King as directed by Josh Boone. The first episode aired on CBS All Access, December 17, 2020, it is the second adaptation of King's novel, following an earlier four-episode miniseries from 1994.

When a dangerous superflu called "Captain Trips" decimates the world's population, what remains of humanity must come together in the wake of the apocalypse.

Soon however one of the remaining safe havens, Boulder, Colorado, becomes the battleground for a greater war between good and evil. One faction is led by the mysterious Mother Abigail who fights to save humanity from the corruptive influence of the dangerous and manipulative "Dark Man" Randall Flagg.

The Stand contains examples of: