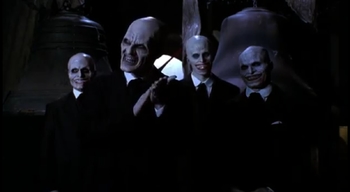 Professor Maggie Walsh is discussing communication in class and asks Buffy to come up to the front desk and lie down on it. Riley steps forward and kisses Buffy as the sun goes down. She goes into the hallway after hearing a young girl's voice. The girl stands holding a box and chanting a disturbing nursery rhyme. Buffy wakes up to see she's been dreaming in class. As they leave, Riley asks Buffy about her dream and they talk about their plans for the night. Both make up excuses as to why they're busy that evening and part ways, seemingly dissatisfied with how their courtship is going.

Giles receives a phone call from Buffy who relays the information from her dream. He begins researching into demons named The Gentlemen. Spike, meanwhile, makes himself very comfortable at Giles' apartment, complaining about there being no Weetabix left to eat. He claims he likes to add butcher's blood to it and repulses Giles with the mental image. Xander and Anya arrive, arguing about whether Xander really loves her or is only interested in her for sex. Her frank openness with the issue makes Giles uncomfortable and Spike laughs at Xander's situation. Giles informs Xander that he needs to keep Spike at his house for a while because an old girlfriend of his is visiting from England. None of them are particularly pleased with arrangement: Xander not trusting Spike around him or his friends without restraints and Spike not wanting to be around Xander and Anya; especially if they're intending to be intimate whilst he's in the room tied to a chair. The three argue back and forth with Giles in the middle.

Willow excitedly joins a Wiccan group but is disappointed by it as the girls there are only wannabe Wiccans with no knowledge of real magicks. When Willow mentions the 'wacky' possibility of performing spells, the leader of the group just ridicules her. However, whilst the rest of the group laugh, one girl named Tara becomes interested in Willow after her suggestion of performing actual magic. She tries to agree with Willow's suggestion but her shyness causes her to be intimidated by the others. Willow realises she's never going to learn anything in the group and talks to Buffy about it. Buffy complains about how slowly her relationship with Riley is progressing. Riley discusses the same thing with Forrest; both concluding that the real reason they can't progress is due to them not revealing their true identities to each other.

The night before bed, Xander ties Spike to a chair as Spike exclaims that he wouldn't bite him even if he could. Spike begins imitating Anya and further annoys Xander. Meanwhile at Giles' apartment, his old girlfriend Olivia arrives and after a brief chat, the pair get straight to kissing. At the clock tower, one of the Gentlemen opens a box and steals the voices from everyone in Sunnydale as they sleep.

When Buffy and Willow wake up the following morning and finding their voices have disappeared, they panic. Leaving their room, they see that nobody else in the dorms can speak either. Xander immediately blames Spike, whose gestured response is very clear. Riley and Forrest try to enter the underground lab, but Riley is unable to open the voice-activated doors. Professor Walsh lets them in, gesturing to them that they should have used the stairs.

Buffy and Willow walk through Sunnydale, armed with whiteboards to write down their thoughts. Sunnydale is completely closed down - apart from liquor stores. A man silently preaches the end of the world. A television news reporter states that everyone in Sunnydale has come down with laryngitis and the town has been quarantined. Knowing trouble is looming that night, Buffy gets ready to patrol and Prof. Walsh sends Riley and a team out incognito to maintain order. Riley and Buffy meet in the street and as he's about to leave, Riley kisses Buffy for the first time. Later that night, the Gentlemen and their footmen lurk out into the night. Olivia wakes up in the night and spots one of them out of the window, floating. Two of the demons enter UC Sunnydale dorms and find a freshman boy. The demon assistants hold the boy down as one of the Gentlemen cut out his heart.

The next morning, Olivia draws a picture of the creature she saw. Giles sees in the paper that there was a similar murder the previous night and recognises what is happening. He puts aside his books of demons and pulls out volumes of fairy tales. In a lecture room at the college, Giles shows the story of the Gentlemen using an overhead projector. They travel towns to collect seven human hearts, taking people's voices as well as this is the only thing that could kill them. They're immune to swords and stakes and only the sound of a real human voice — not a recorded one like Willow suggests — will kill them. The demons have taken two of the seven hearts they need already. Unfortunately, Giles doesn't know how to get the voices back. As everyone else begins researching, Buffy gears up to go patrolling. Riley does the same.

Tara from the Wiccan group tries to make it to Willow's dorm room as the Gentlemen chase her. She finally makes it and the two girls escape. Riley is attacked by the demon's assistants in the clock tower until Buffy shows up to fight against them. The two are at first shocked to see each other but they don't have time to talk about it. Spike vamps out whilst drinking a mug of blood. He bends down by the sofa where Anya is sleeping and as he stands, Xander sees him with blood on his lip. Xander concludes that Spike bit Anya. Xander punches Spike several times before Giles and Anya stop him. Xander then kisses Anya passionately and the two run off together.

Hiding in a laundry room, Willow and Tara try to move a vending machine to block the door but they're not strong enough. Willow tries to move it via magic but can only shake it slightly. Tara understands what she's trying to do and clasps Willow's hand to combine their magic. As soon as they hold hands, the vending machine slams against the door. Buffy gets caught by the assistant demons and as they prepare to cut into her, Riley shocks them with bolts of electricity. They fight once more and Buffy recognises the box containing the voices from her dream. She points it out to Riley who smashes it. The voices get released and Buffy lets out a long, loud scream causing the Gentlemen's heads to explode in a shower of green slime.

The next day, Tara tells Willow that she was trying to find her as she wanted a spell to restore the voices, knowing that from the Wiccan group she was the only one interested. The two talk and Tara tells Willow that she's powerful, even if she doesn't know it yet. Giles and Olivia talk about how many scary things there are in the world and how she feels like she doesn't want to be part of it.

In her dorm room, Riley visits Buffy. He tells her that they need to talk to which she agrees. However, the two of them find that they're overcome with silence once again.