Talk About That Thing 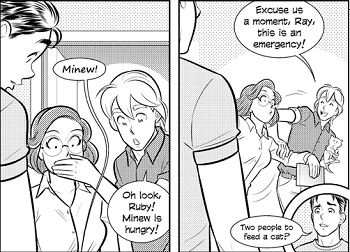 "About this blank piece of paper..."
— Mr. Starchman, Paranatural
Advertisement:

A type of Room Shuffle where a character wants to talk with another character in private, so comes up with some random excuse for the two of them to leave the room together, usually just stepping into a hallway or a bathroom or something for a minute or two.

The excuse may range from completely vague ("Hey Jimmy, we need to talk about that thing? Remember? That thing?") to oddly specific ("Say Jimmy, didn't you want me to show you my walk-in closet?")

About one in three times, the second character will totally miss the point. "What are you talking about? I've seen your closet like a million times." "Not since I painted it. You said you wanted to see it now that it's painted, right?" "I don't remember saying that..."

Bonus points if the person in question deliberately misses the point because he simply is a Deadpan Snarker and either just wants to mess with the asker for a bit or in fact really doesn't want to talk about it. That doesn't happen often, though.

Contrast with Take Five, where the extra character is sent out of the room, and Talk About the Weather, where they can't get away and use innocuous talk about the weather instead. If "that thing" is something like "where do babies come from", you'll be talking about in sexual euphemisms instead. Compare I Need to Go Iron My Dog, where only one person needs an excuse to leave the room.

(Contrary to the title, these conversations rarely involve Marvel Super Hero and Fantastic Four member Ben Grimm, or a certain member of The Addams Family, or the creature from John Carpenter's classic horror film, or the blue-haired troublemakers in Dr. Seuss' The Cat In The Hat.)

Alternative Title(s): Take You Aside Talk