Silly Rabbit, Romance Is for Kids! 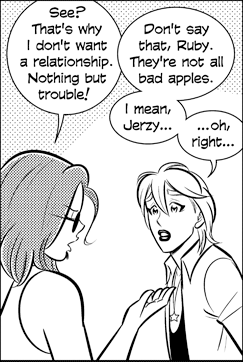 Once upon a time,
Somewhere in your past,
Someone said "forever,"
But that promise didn't last.
Now you don't believe
Love is ever true.
You steel yourself against the day
When I stop loving you.
— Kim Richey, "Every River"
Advertisement:

For some people, especially the cynics and the "logical" or "scientific", a point in life is reached where they consider The Power of Love as a ridiculously stupid fiction that can be downright dangerous, and focus their efforts on satisfying something else instead. Usually, it's caused by their realization that Love Hurts, sometimes due to a lover who jilted them or cheated on them, or because the lovers they witnessed only ended up living in poverty, slavery, Domestic Abuse, being Too Dumb to Live, and other such forms of Destructive Romance that would have been obviously avoided if they didn't let their heart take over their brain.

Alternatively, it's because idealistic shows that heavily favor The Power of Love are often directed at younger audiences and/or have simpler plots that fail to suspend skepticism, and so tend to be associated with immature/irrational thinking.

Also, with age can come the realization that much of what is called love, even sincerely so called, is actually infatuation, physical attraction, or both, and that this is often encouraged by popular culture with the underlying goal of selling things like diamonds, cars, teddy bears, lingerie, and candy (among many others). This can lead to the tendency to assume that love is something shallow, rather than something widely misdefined.

By definition, this is mostly a trope for older individuals. However, slightly older adolescents and some young adults may adopt the same philosophy — especially if they are unusually repressed, old before their time, or pompously bright. It doesn't usually last very long with them, though; they may actually grow out of feeling too old for romance.

This is sometimes Truth in Television.

Subtrope of Jade-Colored Glasses and the Power of Love. See also Silly Rabbit, Idealism Is for Kids! If the character can see the reasoning behind this viewpoint but still can't help themselves, they may be a Fool for Love.