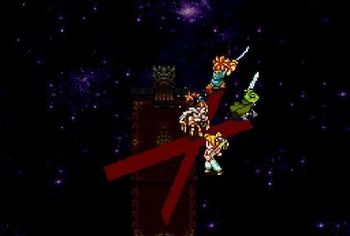 Cyclone + Slurp Slash = X-Strike
"So the basic idea is to gang up on the character and beat the living daylights out of him, huh?"
— Laharl, Disgaea: Hour of Darkness
Advertisement:

A Special Attack that consists of two or more characters working as a team attacking at the same time or in rapid succession. If they both have some sort of superpower, they may even combine their powers to create a new move with the properties of both.

These are often extremely powerful, and rather impressive to watch, especially in video games where they may be considered a form of Limit Break.

Often used to finish off the Big Bad during a Crossover to give both sides the spotlight. Also frequently overlaps with Combined Energy Attack. Sometimes, a Dual Boss may have access to combination attacks, allowing the bosses to coordinate with each other.

May involve Power of Friendship, Power of Love, and True Companions when used as a plot device.

Contrast Ability Mixing, where a single character combines two kinds of attack into one. A subtrope of Meta Power when the combination attack involves the use of powers.

Not to be confused with Combo attacks, which usually mean something different in a fighting game context.

Blanca and Verta use a team attack to take down their opponent.

Blanca and Verta use a team attack to take down their opponent.