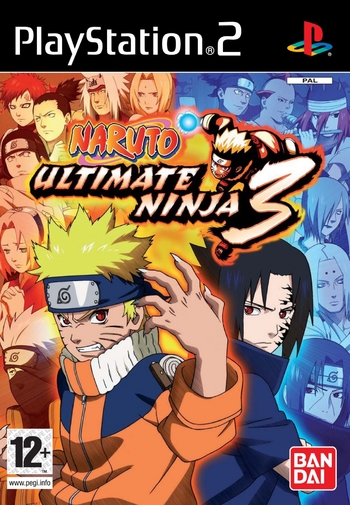 Naruto: Ultimate Ninja 3 is a fighting game developed by CyberConnect2 for the Naruto franchise exclusive for the PlayStation 2. It is the third installment of the Ultimate Ninja series and was released in 2005 in Japan and 2008 in the West.
Advertisement:

The game is a 2D fighter, like its predecessors. It further refines the battle system and introduces the concept of customizable Ultimate Jutsu. Assist characters have been removed, making it the only game in the series to do so. The exploration mode introduced in Naruto: Ultimate Ninja 2 has been expanded into an open world system, where you can travel through a condensed map of the Land of Fire. This mode tells an original story, while the manga canon is told through the recap-like Hero's History.

The game follows Naruto's manga canon from the beginning up to the end of the Sasuke Recovery Mission Arc (chapter 238).