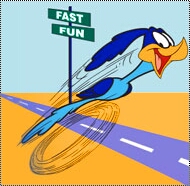 The realistic animation of running characters on a budget is just too hard. Instead, a vertical upper body is perched on a rotating wheel of blur linesnote In most Japanese works, however, it's usually a white spiraling sphere. and (occasionally) visible feet, which is animated in a loop. Add a Wraparound Background and some dustclouds, and voila, the character is running! And really fast, too! An alternate title for this trope could be Unicycle Legs, since if the character builds up enough speed they tend to look like they're on a unicycle.

The preferred sound effect is fast bongos, followed by a whistle (or a ricochet gunshot). Sometimes, just to draw out this sound effect (for Rule of Funny, of course), the character will literally run in place for about four seconds before actually taking off. They'll usually manage to get away just before the person chasing them can catch them, but sometimes the trope will be subverted by having their pursuer grab them just before they can dart away. Or take their pursuer with them on a not-so-merry chase.

When running, the character may sound like a race engine.

See also No Knees, Running on the Spot, Human Hummingbird, and Motion Blur (of which it is a Sub-Trope). Big Ball of Violence is the same principle applied to a fight scene. Not to Be Confused with characters whose feet are wheels, which falls under a variant of Rollerblade Good.