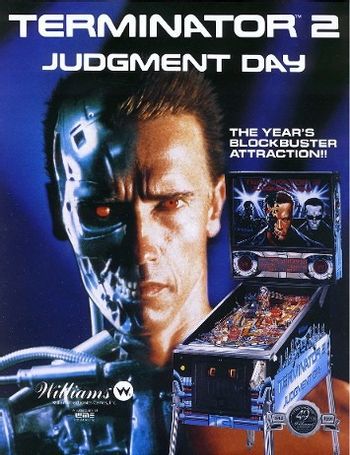 A video game or pinball machine based on an existing property, usually a movie, TV series or comic book.

Because the property is enough to unify these games, they can afford to be a bit more loose with their genre. A licensed title might well be an actioner one level, a Driving Game the next, then back to an actioner before turning to stealth. This is especially the case with movie tie-ins, where gameplay is usually tailored to allow the player to recreate the film's plot as closely as possible. (TV show and comic book tie-ins instead create a new plot, preferably conceived of by one or more writers from the original property, allowing them to advertise this fact on the case. Movie and TV show tie-ins also prefer to rope in actors from the original property for voice work.)

These games, as a group, are generally regarded... well, suffice it to say that many gamers feel the same way about games based on movies as film critics feel about movies based on games. Some titles however, such as GoldenEye, Buffy the Vampire Slayer, The Punisher, and most 3D Spider-Man games, gain a certain amount of respect amongst gamers. In some strange cases, the game receives noticeably better reviews than the property itself, as was the case with The Chronicles of Riddick and Ballistic: Ecks vs. Sever. See The Problem with Licensed Games and No Problem with Licensed Games for particularly bad and good examples, respectively.

There is also a small edge to be gained by being based on an older property. Most licensed titles are made for a TV series at the peak of its popularity, or a movie just about to open. Games like The Godfather, The Warriors, and From Russia with Love get extra points for thinking outside of the box. Star Wars games don't count, as the merchandising cycle for that particular property is unending.

Also note that Sports Games with the official teams' and players' names are also licensed games. These are more often "good" than movie-/series-based games, likely because they were already games to begin with.

In many Rhythm Games, licensed songs take up a large bulk of the songlist, with songs by in-house or commissioned musicians if any taking up the remainder. This is generally not seen as a bad thing, as part of the draw of many rhythm games is playing the game to songs that one is familiar with.

The presence of Title: The Adaptation is a sure sign you are playing one of these. See also The Board Game and The Role-Playing Game for tabletop adaptations. The Advertisement Game is a sub-category of licensed game where the intention is to market a product or company. An Unlicensed Game is an opposite to this as the title implies. This case shows a straight different variety of games (usually loosely) based on popular video game franchises.

Licensed video games with their own pages (collected here for indexing purposes):