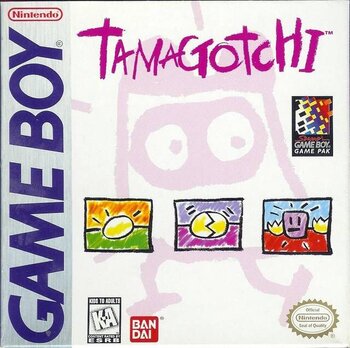 Tamagotchi (Game de Hakken!! Tamagotchinote literally "Found in the Game!! Tamagotchi" in Japan) is a 1997 virtual pet game released for the Game Boy. An adaptation of the original Tamagotchi virtual pet toys, the game is closely modeled after the gameplay of the physical toys, with the player raising a Tamagotchi from an egg to an adult while feeding it, playing games with it, giving it discipline, healing it when it is sick, and attending to its bathroom needs. The Game Boy game features all of the characters from both the P1 and P2 generations of the Tamagotchi toys, and Tamagotchis can freely evolve from characters of one generation into another.
Advertisement:

The Game Boy game introduced two additional stats affecting the Tamagotchi's growth, Stress and Selfishness, additional games and food, daily competitions for the Tamagotchi to participate in, and the ability to praise the Tamagotchi for good behavior and make it use the toilet when it is getting ready to poop. The praise and toilet features would later be implemented to other versions of the physical Tamagotchi toys. The game also introduced the Tamagotchi researcher Professor Banzo and his assistant Mikachu, who help run the Tamagotchi laboratory and give the player advice.

Tamagotchi and its sequels feature examples of: