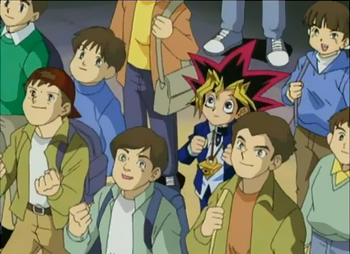 I wonder who the hero could be.
"Really, both of them seemed very ordinary, almost generic. They weren't especially good-looking, although they appeared reasonably well-built, and neither one had any particularly distinguishing features. They were people who would probably blend into a crowd with zero difficulty, with the kind of faces you might see on unimportant background characters in a manga or anime."
— I Am NOT Going Through Puberty Again!
Advertisement:

In media, often times the major characters will have flashy designs while background characters have more generic ones. This ultimately ends up making the protagonist look like they have a Non-Standard Character Design.

This trope is a major reason for a Hair Color Spoiler, as a character will be introduced with a design too noticeable to make them a random extra or minor character.

Sub-trope to Distinctive Appearances and related to The Law of Conservation of Detail. Compare to Faceless Masses, which goes even more extreme and makes the background characters have little-to-no features, Conspicuous in the Crowd, for when someone's behaviour in a crowd marks them out, and Hero with a Unique Name, where the protagonist has a stand-out name. Contrast with Vanilla Protagonist, Ridiculously Average Guy, and Cast of Snowflakes, where every character got a distinctive design. In some cases, the protagonist is Stylized for the Viewer and not "really" meant to look abnormally designed.