Film / Trail of the Broken Blade 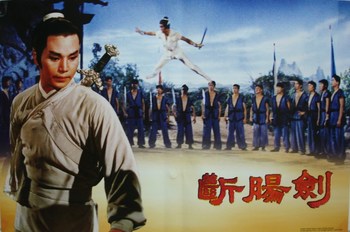 Jimmy Wang-yu is here! Time to load up on bodybags...

Trail of the Broken Blade is a 1967 wuxia martial arts film from Shaw Brothers, directed by Chang Cheh and starring Jimmy Wang Yu, the second of three collaborations between Chang and Jimmy (released between One-Armed Swordsman and The Assassin (1967)).

When an impulsive swordsman, Li-yue (Jimmy), kills an official responsible for his father's death, he's forced to abandon his fiancee Liu Chen-erh (Chin Ping) and most of his allies to go on the run. Meanwhile, a powerful bandit leader, Chief Tu, is terrorizing the martial arts world with his legion of killers. Travelling the martial arts world as a wandering swordsman, Li will inevitably end up confronting Chief Tu in his island hideout for a climatic final battle.

Trail of the Broken Tropers...