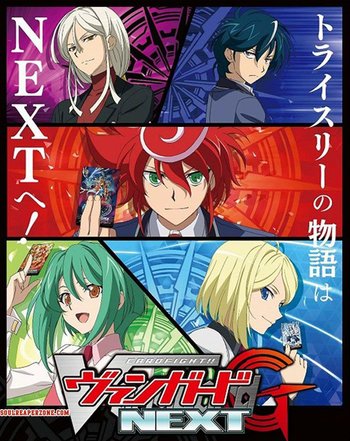 The sequel to the original Cardfight!! Vanguard series.

Cardfight!! Vanguard G, began airing in Autumn 2014. Taking place after a three-year Time Skip, it focuses upon a brand new set of characters: Chrono Shindou, Shion Kiba and Tokoha Anjou, who all wield new "G Units" with the "Stride" ability.

A second season, GIRS Crisis, began airing in October 2015 and focuses on a new mega-quest hosted by the Friendly Vanguard Association which will see Team TRY3 traveling to all the different branches of the organization to win the title of Generation Master.

It was followed by its third season, Stride Gate in April 2016, which pits TRY3 against the mysterious Ryuzu Myoujin and the "Company" organization that supports his sinister ambitions.

Five months after the events of Stride Gate Cardfight!! Vanguard G NEXT followed up. With Shion focusing on the Kiba company and Tokoha overseas, TRY3 has split up as Chrono transfers to Tokyo Metropolitan Harumi High School. With the announcement of the Under 20 Cup he teams up with Taiyou Asukawa and newcomer Kazuma Shouji to conquer it. But standing in his way are his former teammates as Shion and Tokoha have formed their own teams for their chance to become U20 Champions.

Both series come together in the final series, Cardfight!! Vanguard GZ, where units from Cray inhabit the bodies of cardfighters to bring about their master Gyze and end both worlds as we know it.