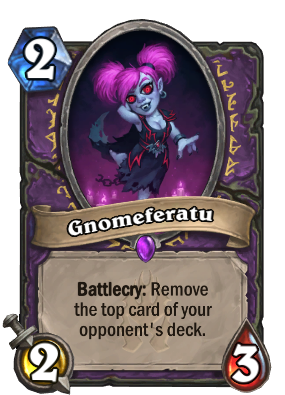 A shortstack that makes the opponent's stack even shorter.
"Cheater? It's not my fault that Joey didn't think to examine his deck before challenging me to a duel!"
— Weevil Underwood, Yu-Gi-Oh!
Advertisement:

In Collectible Card Games and Deckbuilding Games, the most important factors in whether you win or lose are what cards are in your deck, and which ones you draw. Being able to predict and manipulate what you'll draw is a key component to strategy in most of these games, whether that be through things like planting cards that allow you to search for and retrieve other cards that you need or by simply putting as many copies of a certain card as you can into your deck in hopes of increasing your odds of drawing it.

However, all the strategy in the world can't save you if your opponent decides to make you shuffle your hand into your deck and draw all new cards.

Some games allow or even encourage the direct manipulation of an opponent's deck during play. Common forms that this takes include:

In card games where not having another card to draw at the start of your turn is a loss condition, the strategy of trying to make your opponent run out of cards before you do is known as milling, originating from the Millstone

card in Magic: The Gathering (and later being added as a proper gameplay term).

When it's your own deck that you're manipulating, that's Luck Manipulation Mechanic.