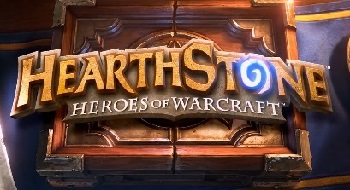 Who said good games had to be epic in scale?
Thrall: "It is said that wars are only won upon the anvil of honor."
Jaina: "Others believe victory requires strategy, and a mastery of power."
Illidan: "War is deception, a game played best from the shadows."
Garrosh: "Only strength and raw power can assure total dominance!"
Innkeeper: "But o'course, you could forget all o' that... And just have fun!"
Advertisement:

The game allows you to step into the shoes / boots / what-have-you of the original nine character classes from World of Warcraft (and the Demon Hunter), each represented by a character from the Warcraft universe. Each class has a special Support Power costing two mana (except the Demon Hunter, whose power costs one mana), which can be used once a turn (another change from the original, where hero abilities could only be used once period). Each class has its own unique cards, along with neutral cards that every class can use.

The game is very streamlined compared to most CCGs. New mana crystals are automatically gained each turn without having to play/sacrifice a card, to a maximum of 10. Mana is spent to cast Minions (creatures), Spells (one-shot effects that act directly on the game state), Weapons (which your Player Character wields to deal direct damage, but are breakable), Hero Powers (weak abilities that can be used once per turn), Hero Cards (cards that give you a new, stronger Hero), and Secrets (traps which sit on your character until triggered, typically by something your opponent does). Secrets are your only way to interact with the opponent when it's their turn: they make all the other decisions, being able to target your Minions with their own, or bypass them entirely to hit you in the face. Targeting Minions can be worthwhile, though, because — as in the original CCG — damage is not reset at the end of each turn, so applying Death of a Thousand Cuts to a large enemy creature is a viable strategy. The game also takes advantage of its digital medium to embrace certain mechanics, like shuffling things into your deck, mechanics like "50% of the time, this Minion attacks the wrong enemy

," and single-player duels against AI bosses, which are much easier to implement digitally than they would be at a gaming table. Because of its emphasis on swiftness and spectacle, cards can have extravagant effects, such as wishing for the perfect card

Year of the Kraken

Year of the Mammoth

Year of the Raven

Year of the Dragon

This year marks a unique change, with every set following a single narrative instead of three unrelated stories. It also saw the Lackey mechanic, cards that generate special 1/1 minions for 1 mana with potent Battlecries, spread throughout the year.

Year of the Phoenix

This year introduced a brand new playable class: the Demon Hunter. The Demon Hunter employs swift attacks, demons, and their class keyword Outcast, which activates an additional effect if the card is played from either outermost spot in the hand.

Year of the Gryphon

This year follows a narrative focusing on ten Mercenaries - five Alliance and five Horde. Their story is told throughout the expansions as well as in the new Book of Mercenaries missions.

Year of the Hydra

Events
Every so often, Hearthstone celebrates certain special holidays. A few of these celebrations are purely cosmetic (save for any special bundles added to the shop), such as Talk Like a Pirate Day or the Lunar New Year, which merely change each Hero's "Greetings!" emote, and there are also holidays only celebrated through special Tavern Brawls, like Noblegarden (WoW's equivalent to Easter), but there have been a number of events- both holiday-oriented and not- that are of significant note, which are listed below:
Game Modes