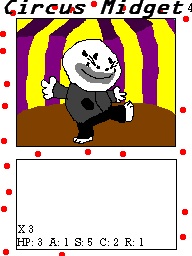 Using them is a valid strategy.
Advertisement:

H.A.M (Heroic Armies Marching) is a combination Card Game and Turn Based Strategy. The underlying concept is that each card is either a handful of units to be placed upon the game grid, or a spell for messing around with the battle. The game is full of satirical fantasy elements. Dire sloths are pitted against omnipotent space bats, man-eating demons against eldritch horrors. The game is rather simple, with an AI mode, a 2 player mode, and a tutorial.

Takes Rule of Cool and Rule of Funny and makes a fantasy world out of it.