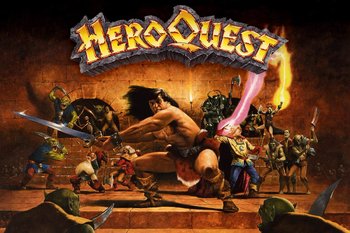 High Adventure in a world of magic!
"The best thing about HeroQuest is..."
—BardicBroadcasts, Why Heroquest is so Great

HeroQuest is a Dungeon Crawling Adventure Board Game set in a version of the Warhammer universe. It uses a board that represents an outline of a generic dungeon setting, modified to represent a different location for each adventure by placing different obstacles, doors, enemies and fixtures. Up to four heroes — the barbarian, the elf, the dwarf, and the wizard — explore each adventure and play against the other player, who represents the forces of evil and acts much like a Game Master in that they know everything about the current quest in advance and reveal it as the players advance. The whole thing amounts to a simplification of a tabletop RPG.

The game was originally designed by Games Workshop, and released by Milton Bradley in Britain; later versions of the game changed some aspects including but not limited to: names, monster hitpoints, and available weapons. However, at least one translation to another language (Finnish) was based on the UK version.

The setting is modified and simplified from the Warhammer world. Different factions of monsters are all united under the command of the Big Bad Evil Overlord Chaos Lord Zargon (Morcar in the original British version), represented by the 'evil' player, and the heroes are students of the generic mentor known as Mentor.

Later on there was Advanced Heroquest which was a version with expanded rules such as the use of critical hits and fumbles, as well as Colleges of Magics to provide different schools of spells. After Advanced Heroquest, there was the even more rules and background intensive Warhammer Quest which jumps whole-heartedly into the Warhammer world, and now Warhammer Quest: The Silver Tower which takes it into the Warhammer: Age of Sigmar setting. There were also three gamebooks released in the early nineties, which featured a non-interactive novella in addition to the game portion; the first gamebook was designed to be played by up to 4 players, but the latter two were solo adventures.

There's a similar board game based on Warhammer 40,000 called Space Crusade. Descent: Journeys in the Dark is often considered a Spiritual Successor.

After decades of no availability and news, Hasbro, who had bought out Milton Bradley years prior, and Avalon Hill announced a crowdfunding campaign to bring the game back. You can back it here

, if you wish, though for the time being, this link only applies to residents in the US and Canada. It has been announced for the UK

too. The revised game was released to retail in 2021, with minor changes to edit out references to the Warhammer Fantasy universe (as Hasbro is a direct competitor to Games Workshop through its Wizards of the Coast brand as well as Avalon Hill).

The best thing about Hero Quest is the Tropes!