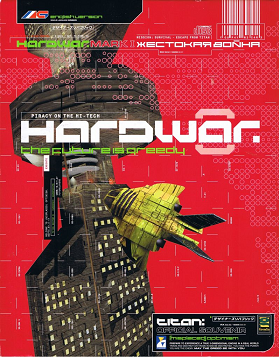 There's a war going on out there. And it ain't easy.
The Future is Greedy
Advertisement:

Hardwar (Also HardWar or HardW[a]r depending on how one takes the game's logo) is an obscure space planetary air-trading sim developed by The Software Refinery and released in 1998. Considered at the time a Spiritual Successor to Elite.

The game takes place in a city complex built among the craters of Titan. Misplaced Optimism is a dystopian slum, earning the label "Misplaced" following the abandonment of the formerly lucrative mining city by the various mining corporations that ran it, leaving all the workers behind with no means of escape. MO is being fought over by two rival factions, Klamp-G and the Lazarus Family; with various smaller groups thriving in the cracks. The preferred mode of transportation around MO are Moths: solar-powered speeder/aircraft crossovers available in a variety of models. It's this dynamic that makes the game interesting: During the day, Moths generally have no problem staying aloft and engaging in combat, but once night ticks around, energy starts to drain rapidly from the Moths' cells, leaving them stranded in conveniently placed LightWells while better equipped combatants tear them apart.

Like most games of the genre, Hardwar allowed players to focus on three areas: scavenging, combat or trade; in fact, each of the three original starter Moth setups was designed around one of the three. Traders would trade resources among the hangars of MO, pirates would try to hijack and steal the cargo from traders, while scavengers would either have to work fast to scoop up any dropped loot before the pirates could manage to collect, or by picking up the remaining pieces of scrap metal left behind from battles. As expected, players could then use their new wealth to upgrade the equipment of their Moths or upgrade to a shiny new Moth model. A patch added more starting setups, mostly easier than the originals due to much better equipment being immediately available.

It's also possible to own hangars by visiting the local estate agent. Hangars could then be managed to be private (for storage of spare Moths, clones and various other resources) or even opened up as public hangars to act as repair shops or stores, all for a neat profit for the player. One could even install manufacturing equipment such as distilleries, so it was possible to buy materials for goods at a cut price, manufacture the goods and sell them directly.

As usual, the plot was nothing to write home about, but had its moments. Most information was passed to the player in emails, or delivered by full motion video.

Hardwar still has a fair amount of community support. It also turned out that the game's multiplayer allowed for persistent online games to function, so a few such servers exist.

Notably, after the developing company went out of business, the game's original dev team started making game mods for their own game, specifically the 'UIM' unofficial patch series, which sought to fix the issues they weren't able to before going under, and actually did a fairly good job of it.

Here are some Trope Examples for you, Aviator:

The future used to be something to look forward to.