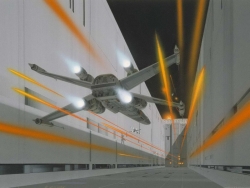 Imperial Stormtrooper Marksmanship Academy: Failing to hit anything since 1977.
General Dodonna: The battle station is heavily shielded and carries a firepower greater than half the star fleet. Its defenses are designed around a direct, large-scale assault. A small one-man fighter should be able to penetrate the outer defense.
Gold Leader: Pardon me for asking, sir, but what good are snub fighters going to be against that?
General Dodonna: Well, the Empire doesn't consider a small one-man fighter to be any threat, or they'd have a tighter defense.
— Star Wars: A New Hope
Advertisement:

"Point defense" is a military term referring to the active protection of a single asset, such as a ship or a building. In modern terms, this means computerized systems with sophisticated targeting sensors that automatically engage

incoming enemy aircraft or missiles. In fiction, this can apply to space combat as well. When a target is Point Defenseless, these systems never work. They may be able to swat Mook swarms from the sky or slag a Red Shirt or two, but even in the best of cases they're mysteriously unable to touch any main character. Their primary purpose seems to be offering an impressive light show.

This may be in part because many fictional point defense system still use WWII-style manually operated, visually targeted cannons instead of the automatic systems that replaced them (even when the story ostensibly has a higher tech level than modern day), but even the most futuristic AI-controlled laser-firing point defenses can fall victim to this trope. Attackers may be forced to jink and dodge, or they may be able to cruise in straight and level while bullets whizz past them, but even if the point defenses manage to take out some of the attackers, it will never be able to stop them all.

This is an application of the Rule of Drama; it's far more dramatic when people have to defend a target, rather than faceless machinery. It can also be a form of Plot Armor and Conservation of Ninjutsu, when point defense can shoot down Mooks and Red Shirts but not main characters. After all, how ignoble would it be for The Hero to get shot down by something as abrupt and impersonal as an automated turret, without even a chance to demonstrate their Improbable Piloting Skills in an Old-School Dogfight? It can be part of Acceptable Breaks from Reality if the game system explicitly intends for a Tactical Rock–Paper–Scissors scheme. At its simplest, you could have something like big-gun battleships getting nibbled to death by fighter/torpedo boat wolfpacks (IN SPACE!), which in turn get shredded by PD-heavy escorts or screening elements, which in turn get blown away by battleships...

In gaming, an Arbitrary Minimum Range may be implemented because of this trope, to prevent them from getting stuck by tracking an enemy that's too close for them to actually hit, which in turn will also give a guaranteed safe spot for attackers (but likely very, very dangerous to get to it in the first place).

See also A-Team Firing and Imperial Stormtrooper Marksmanship Academy. If the point defense guns blaze away at where the hero just was, that's a Hero-Tracking Failure.