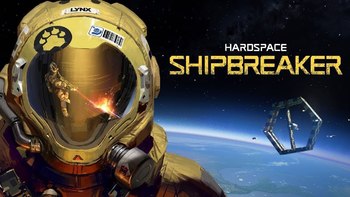 Current Debt: $1,252,594,441.92
Humankind has industrialised much of the Solar System
Earth has deteriorated into a place of squalor and decay
In orbit, a new breed of worker has emerged
THE SHIPBREAKER
The labor is extremely dangerous
But for a select few
The hazard pay is worth the risk
— Opening Cinematic
Advertisement:

A six-degrees-of-freedom first-person Puzzle Game from Blackbird Interactive, known for Homeworld: Deserts of Kharak, Hardspace: Shipbreaker follows the player character as they seek to escape Earth and Work Off the Debt they owe to the LYNX Corporation - by scrapping and salvaging decommissioned starships in orbit above Earth.

It's simple, really; disassemble ships and throw the parts into the correct chute or the Barge below. Oh, did we mention most of these ships are still powered, pressurized, and often full of other potential hazards just waiting to be unleashed by a careless Cutter? Just try not to explode.

"Each day he steps into the yard,
to earn his wages working hard.
I pray to the stars and heaven above,
to return my daddy to those he loves.
If there comes a time where he and death meet,
bless the next Cutter that takes his seat."