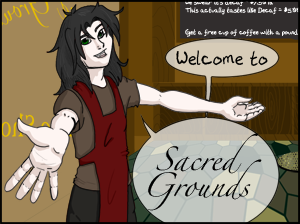 A warm welcome from a cold-blood
Advertisement:

Sacred Grounds is a webcomic

about the titular coffee shop and metaphysical bookstore, and its employees, which include Wolf, Westly, Ki-rin, and Crocuta, Nweka, Stefan, and Kote.