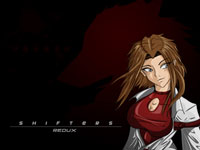 Shifters is a Web Comic created by Marie Tary in 1998.

The comic has been in various stages of publication and updates from that time until the present, including a long hiatus from November 2007 to July 2009. There was another long hiatus from late August 2007 to June of 2011 when circumstances were such that the author could resume updating on a weekly basis. Since this time updates have been regular with one a week.

Has now been on hiatus since December, 2018.

) of Shifters, while conceived by Marie Tary, was initially a creative collaboration between herself and a writer named James Strocel. Tary herself wrote and illustrated the first two issues of the comic, bringing Strocel in at the third issue ("Tears of Blood"

in 2001). Strocel continued writing for the series until the issue “Wolf’s Clothing”

(in 2002) when creative differences between Tary and Strocel on the direction and content of the story forced a parting of ways. After this point Tary was responsible for both writing and illustration.

After this point in the "Original Run" several plot points and characters were scaled back or trimmed from the story alltogether to bring it back into line with the artist/creator's original vision through plot but the problem of creative differences in the past writing remained such that it would have led to eventual Canon Discontinuity and many Continuity Snarls if the story was allowed to continue on its course.

Rather than institute several improvised adaptations to this that would result in numerous Adaptation Induced Plot Holes, and instead of writing in a Reset Button by way of a Deus ex Machina or similar device, Tary decided to institute a full Continuity Reboot with "Shifters - Redux"

While the overall plot arc remains the same between Shifters

the story and art are now under the sole control of Tary. Several characters and side-arcs have been eliminated or scaled back and as a result many background points relevant to later plot development have been expanded greatly to bring them into line with her vision. The overall tone is now much darker and grittier with less comedy and more drama.

Shifters is the story of a young woman and her friends who discover they share a unique fate.

Set in the not-so-far future of an alternate earth, there are two worlds. The Waking World that people know, and the world of The Veil, which lies hidden in the shadows. The secret world of The Veil, harbors the monsters thought lost to time, secretly alive and well in the dark places of the isolated Shade City. The conspiracy to keep the knowledge of their existence secret, The Veil itself, has been kept, by force , for centuries under the careful watch of the races that form it. Silent wars of The Veil races have raged right under humanity's noses, and continue to simmer on and under the streets of Shade City. Currently the New Gen Vampires and Shifters have been silently escalating their long standing war, and the vampires have come up with a plan to win. But what they didn't count on was the re-appearance of an ancient horror so powerful and terrible that it is only spoken of with whispered hatred, its name cursed.