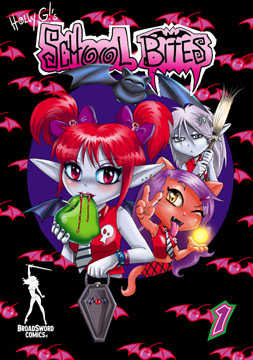 is a fantasy/comedy webcomic by Holly Golightly (letterer and colorist to Tarot: Witch of the Black Rose which her husband writes). SB tells the story of Charlotte Webb who, as the story opens up, is shown in the aftermath of being a vampire victim. Now a vampire herself, she is quickly invited to join Shadow Academy to learn how to be a proper bloodsucker. Once there she meets her roommates, some recent undead like herself while others are inherently monsters, and is re-christened Cherri Creeper (as being turned is considered a "new birth"). Thus begins her semester in a world of monsters and magic.

SB was actually started in 2004 as a self-published title part of the Broadsword Comics line before being converted to a webcomic. It still prints volume sets out as well thanks to the extra publicity the webcomic brings in. Additionally the comic started on Keenspot when it moved to the web. But since then has moved onto its own site that has partnered with Pixie Trix

. Later it was packed with an unrelated webcomic about her pet cat.

While nowhere near Tarots level, the comic can still be quite Not Safe for Work from time to time so reader caution is advised.

At the current, the series seems to be on hiatus with the last known work being the crossover it had with Tarot. Holly has mentioned that due to running Broadsword with her husband, she hasn't had time to work on it. But does plan to continue it when she can and revamp the website when that happens.