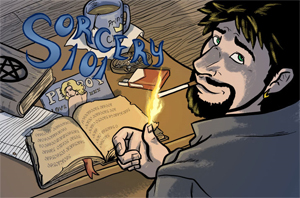 is a fantasy/action/drama webcomic written and drawn by Kel McDonald. It follows Danny Gunn (private school teacher, wannabe sorcerer, former crown prince) and his various friends and acquaintances. Friends include Brad and Ally Wolfe (a werewolf and a mage, respectively) and, to a lesser extent, Pat, the vampire who teaches him magic. There is also Seth, a vampire of several thousand years, and the comic's resident Magnificent Bastard. Whether or not Seth is a friend is up for debate, but Danny is blood bond to him, which can come in handy. There is also a large and dynamic secondary cast, the members of which tend to show up sporadically.

The comic concluded on October 17, 2016, after eleven years.