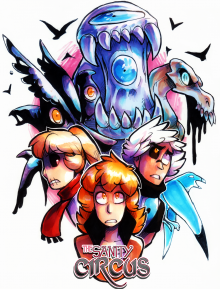 It gets worse here every day.Pictured Left: Posey. Right: Fletch. Front: Attley. Back: One of Sammy's eyes.
Advertisement:

The Sanity Circus (also known as SanCirc for short) is a Web Comic by the user Windfilte (or just 'Windy') about Attley Grimshaw, a young girl in the strange, inconspicuously-named city of Sanity. For her things become stranger than most when her best friend turns out to not be what she seems, and soon discovers that this may apply to the entire city itself.

So begins the journey under the surface of a city that on the surface has demons wandering the streets and where teenagers can be grounded for practicing magic in their bedrooms. Underneath the surface lie secret societies, an army of musical instrument-people known as the Instrumen, a strange process performed on every new Director to take office and a terrifying race of Eldritch Abominations called the Scarecrows. The circus in the centre of town itself seems to be at least knowledgeable about if not directly connected to all these things, but the further you ask the more layers of secrecy seem to protect things. Hence Attley and a shapeshifter boy she encounters named Fletch Gray, along with many varied allies and acquaintances along the way, try to dig up the answers to their own individual questions out of this mess, while also surviving encounters with the returned Scarecrows and constantly trying to outwit the Hidden Agenda Villain on their tail. A villain who appears in the form of a 15-year-old girl, and whose eyes turn black when angry. Welcome to Sanity, everyone.

The comic was hosted on SSP Comics and Tapastic, but now has its own proper website.

The first ten chapters have also been posted to the artist's DeviantArt account. The comic updates on Mondays, Wednesdays and Fridays. Note that the author's content recommendation is 'Teen+'.

The Sanity Circus contains examples of: