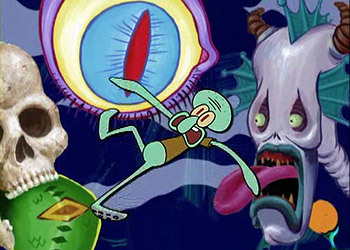 Would anyone else like to enter the Fly of Despair?
"Breathe the Fire;
Walk the Air;
Drink the Earth;
Warm your hands at the Water."
— A greeting in Planescape's Limbo
Advertisement:

For the times when you enter a space-time rift and the next dimension reminds you of the last time you dropped LSD.

When characters go to Another Dimension, it'll never resemble anything from our reality, but instead it will be... weird. Some can look like the inside of a lava lamp, some have landscapes that look like those Salvador Dali paintings,

and others are not so pleasant. What's for sure is that the dimension won't resemble anything like our own, and the rules of physics are different or nonexistent. This can be Played for Laughs.

Contrast with Cloudcuckooland. What makes Cloudcuckooland weird is that the cultural norms there are very different from what we're used to. Acid Trip Dimensions may not even have inhabitants, and the dimension's physical laws themselves are wonky. And that's if the Acid Trip Dimension is even fleshed out; sometimes it's just a brief sequence to show that the character is doing some interdimensional traveling.

This may sometimes intersect with Elemental Plane, generally in situations where a dimension embodies a concept such as Chaos or Madness or where distinct planes become mixed or collide with one another.

For a more musical experience, see Disney Acid Sequence. See also Hyperspace Is a Scary Place, Eldritch Location, Ludicrous Speed and Reality Is Out to Lunch. Can be a Dangerously Garish Environment if dangerous. Black Holes and Cool Gates are common methods of visiting these places.

The Ancient One gives Stephen Strange an introduction to the true nature of reality by catapulting him across the multiverse and introducing him to the many different dimensions - many of which are quite astonishingly surreal.

The Fly of Despair

The Ancient One gives Stephen Strange an introduction to the true nature of reality by catapulting him across the multiverse and introducing him to the many different dimensions - many of which are quite astonishingly surreal.

The Fly of Despair