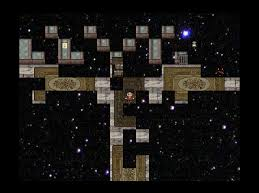 All the stars are projectors here.
Advertisement:

The stars in the sky are a thing of beauty and wonder. Long has humanity been fascinated by them. But what if they are not simply giant balls of light? What if they are actually living beings of unspeakable horror and incomprehensible power? And what if, one day, they were coming to kill us all?

So claimed Dr. Luis, who dedicated himself to saving the world from imminent doom. To this end, he adopted six children to raise them to combat the threat. But things went wrong, and now Alex is the only one left.

Now, the stars have come to reap, and Alex is out of time. Alex is certain that the key to survival lies within their childhood home. Unfortunately, there are other things that remain in Alex's childhood home. The shadows, angry, hurting things that are desperate for a little extra company, are after Alex. After all, they've been alone for so long...

South of Real is a short horror game by indie developer Matthew B. Hare. The current version was released in summer of 2016, and can be downloaded for free on Itchio