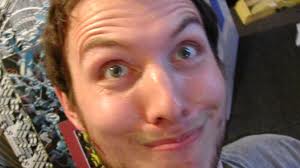 The face behind the madness.
Advertisement:

Cyriak Harris, or simply "cyriak," is an animator from the U.K. who makes videos which are both incredibly beautiful and bizarre. Harris first gained exposure for his imaginative gif animations on the b3ta message boards, which soon drew a cult following.

He and his works have been featured in various other media, such as Adult Swim and the BBC Southeast Today.

. His regular music profile can be found here

. He has also designed several maps for Doom, including a well-received megawad named Going Down.

He now has a novel out, called Horse Destroys The Universe.

Tropes to apply to Cyriak's works: