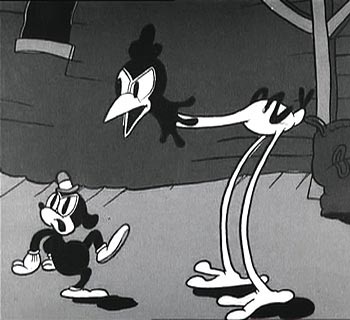 "Stand up, you sinner, we got you at last!"
"Officially, LSD was first produced in 1938. We say "officially" because this cartoon says it's from 1930, and there's no way it was created without massive doses of acid being pumped into everyone involved."
— Cracked, "5 Old Children's Cartoons Way Darker Than Most Horror Movies"

"Swing, You Sinners!" is a 1930 Talkartoons short, produced by Fleischer Studios and featuring their character Bimbo the dognote The name Bimbo was chosen because in the 1920s the word was mostly associated with men who liked to fight..

The short begins with Bimbo making a nighttime raid on a hen-house, attempting to steal one of the chickens. After a humorous scuffle with one of the hens, a police officer shows up and begins chasing him. Bimbo evades capture (albeit losing the hen and its chicks along the way) but winds up trapped inside a graveyard, where a legion of wily ghosts unite to not only terrorize him for his life of crime and debauchery, but eventually spirit him away.

An outstanding example of the surrealism which characterises both Fleischer Studio's art style and that of other producers at the time, Swing, You Sinners! has been referenced numerous times in media since its original release.

Contrast to Disney's The Skeleton Dance, a short with a similar macabre theme (but not nearly as wild). Also of note is Van Beuren Studios own knockoff of the film, "Panicky Pup".