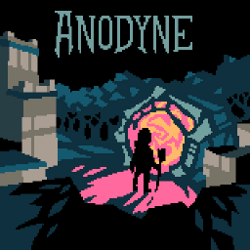 "Hello? ... Young? HEY! Listen, you are about to wake up…"
— Unidentified Voice
Advertisement:

Anodyne is a 2D, Top Down Action-Adventure indie game developed by Marina Kittaka and Sean Hogan during their last years in college.

Players take the role of a white haired human named Young who awakens in a strange world simply called The Land. Young is approached by a cloaked man named Sage, the village elder and is told he needs to save the Legendary Briar from the Evil Darkness. But all is not what it seems and you don't know who you can really trust..

Anodyne takes clear inspiration from The Legend of Zelda series. Players will explore a huge, nonlinear world filled with very strange locations and people. There are various Plot Coupons you need to obtain by exploring the world and completing dungeons. You'll collect keys, complete puzzles and other Action-Adventure hallmarks.

What sets this game apart is the visuals, tone and atmosphere. The game's tone ranges from tense and frightening, to strange and surreal, to melancholic and sometimes very beautiful.

Anodyne can be purchased directly from the official website

for $9, and it also available on Steam for $9.99. Interestingly, Kittaka and Hogan themselves have uploaded the game onto Pirate Bay, making it available for free, so one may essentially pick one's price.

The same duo, under the name Analgelsic Productions have gone on to create two more games, Even the Ocean, and a sequel, Anodyne 2: Return to Dust.

Compare to Link's Awakening and Yume Nikki, which the game creators have cited as inspiration.