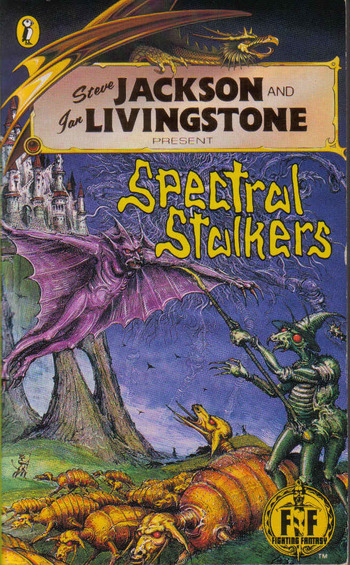 If this cover doesn't convince you that you're in for one hell of an Acid-Trip Dimension adventure, nothing will!
"Hunted across Time and Space!"
Advertisement:

Spectral Stalkers is the 45th entry of the Fighting Fantasy series of Gamebooks written by Peter Darril-Evans, his third and last contribution to the series.

You are a wandering adventurer who, after having your fortune told in a fair in Khul, was forewarned of great danger coming your way on the next stages of your journey. Dismissing the fortune as hocus-pocus mumbo-jumbo, you then set off towards the town of Neuberg for more adventures.

En route to Neuberg, a mysterious Winged Humanoid suddenly drops from the sky and lands right in front of you, and for you he delivers the Aleph, a mysterious Orb which can send whomever carrying it across dimensions. You are now holding one of the most mysterious and powerful artifacts in all of Allansia, and its up to you to prevent it from falling into the wrong hands as you evade the sinister Spectral Stalkers coming after you, by skipping from one dimension to another.

This book is unique considering that, while starting in the usual Fighting Fantasy setting of Titan, by using the Aleph you can end up in a wide variety of settings — mysterious ruins, underground dungeons, faraway forests, fantasy gardens and even a futuristic spaceship at one point. The amount of paths you can take is endless, right to the point where your adventure feels almost like it is part of a Dream Sequence, complete with generous dose of Mind Screw.

There is no linear path, no straight route to the end; should you eventually find your way back to Titan after the trippy adventure with the Aleph, without getting lost between dimensions or falling afoul of the many traps along the way, you may find the rewards you seek...