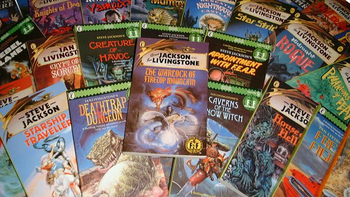 "YOU are the Hero!"
Advertisement:

A series of Gamebooks targeted at children and teenagers, responsible for popularising the concept in the United Kingdom. The majority of the 50+ books were set in a generic fantasy land called Titan, which later got its own tabletop RPG spin-off. Originally published by Puffin throughout the 1980s and 1990s, the series went out of print in 1995, having amassed 59 gamebooks, several spin-off series (including a range of non-interactive novels) and many other related books, boardgames and video games.

Wizard Books revived it in 2002, republishing some of the original books with new covers (and later some new adventures, including the infamous "lost" book Bloodbones which had been intended for release as part of the Puffin range). Following a brief tail-off, they relaunched their relaunch in 2009 with another range of new covers and more new adventures. The last new print adventure was released in 2012 to mark the 30th anniversary, although electronic versions of some of the books are currently being released by Tin Man Games for Steam, iOS and Android — many of these are expanded versions of the original books with new features. In 2017, the series was relaunched yet again for its 35th anniversary with more reissues and new adventures, this time being published by Scholastic.

The game mechanics are like a simplified single-player version of Dungeons & Dragons. Aside from the usual Dungeons and Dragons-style themes, there are adventures set in sci-fi universes, a Mad Max rip-off, a Star Trek pastiche, a haunted house horror, a superhero scenario, and... Sky Lord, a book which was almost certainly written under the influence of psychedelic drugs and Dadaist thinking.

The series has the standard second-person narrative style. Outcomes are influenced by three randomly determined statistics: Skill, Stamina, and Luck. A lot of the books introduced a fourth statistic, such as Faith or Honour, a selection of special skills, or statistics for your vehicle.

As you will see on the Trope list below, the franchise has amassed quite a bit of mockery over its run, yet it remains fondly remembered and has an unusually devoted fanbase. This best example would be the web-based fan magazine Fighting Fantazine.

The books were were written or presented by Ian Livingstone and Steve Jackson note a different Steve than the Steve who runs Steve Jackson Games, though the latter has written a few books, see below. The series has had several Spin-Off series, most notable being Sorcery!, The Riddling Reaver (a multi-player gamebook available for up to 4 participants — a Game Master and 3 or more adventurers), and a game on the Nintendo DS. In 2017, Nomad Games made Fighting Fantasy Legends and a year later it came up with Fighting Fantasy Legends Portal for the PC and IOS. Meanwhile since 2011, Arion Games has been reprinting and expanding on Advanced Fighting Fantasy (which now has Stellar Adventures as a sci-fi spin-off).

The series now has a Character Sheet under construction here.

open/close all folders
The Series in General
The World of Titan in General
Your adventure ends here.