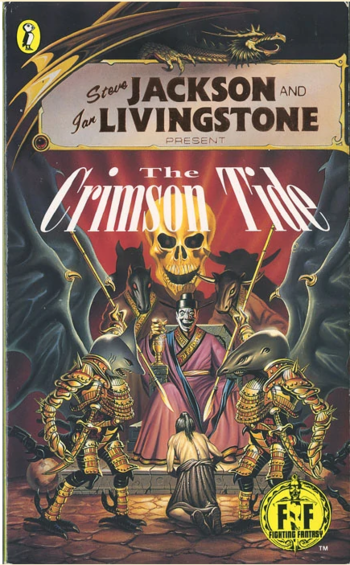 The Crimson Tide is the 47th entry in the Fighting Fantasy series of gamebooks, written by Paul Mason.

Set in the Isles of Dawn, the FF-verse's Fantasy Counterpart Culture of Ming Dynasty China, your hero starts off as a young teenager who witnessed the massacre and destruction of your family and village by a band of Malevolent Masked Men. Being among a few survivors, with some of your childhood friends in tow, you must decide whether to travel to the Imperial city and seek justice, or stay behind to repair whats left of your hometown.

A unique entry in the FF-verse, this is the only book where your character starts as a mere teenager — as such, you begin with dismal SKILL and STAMINA stats, but depending on the journey you take, your stats will change based on your experiences and skills you've learned. Throughout your quest for vengeance, the book will instruct you to add a year to your age, at which point your STAMINA will be restored to the max, and your initial SKILL may or may not change, based on the path you've chosen.

This book have nothing to do with the Denzel Washington movie, Crimson Tide.

The Crimson Tide provides examples of:

From your personal tragedy you have forged a new chance for the peoples of the isles. You can hold your head up high at last and call yourself heroic.