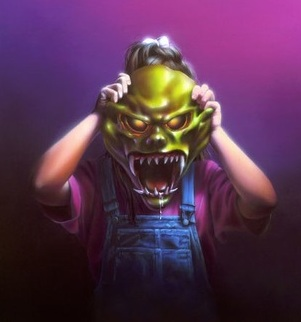 "Gee, I wonder what will happen when I put on this creepy mask that I found in that heavy locked box with warning labels on it?"
Advertisement:

A more literal version of Becoming the Mask, this is a mask, helmet, or other headgear that has some form of corrupting influence on its wearer. It may be possessed by an evil entity, a Mind-Control Device controlled by the Big Bad, a strange alien parasite... whatever the specifics, it is powerful enough to turn most ordinary people evil or drive them insane. Often grants the wearer supernatural powers as well, which of course reduces the victim's temptation to remove the mask.

The mask may have an immediate, obvious effect, or it may take a while before the wearer's friends notice he is Not Himself.

Bonus points if you can't get it off. And God help everyone if the mask can fly.

Sub-Trope of Artifact of Doom, Mask of Power and Clothes Make the Maniac. See also Murderous Mask and Clingy Costume. Not to be confused with Malevolent Masked Man.

Uka Uka is an evil mask that was imprisoned long ago before being freed.

Uka Uka is an evil mask that was imprisoned long ago before being freed.