Literature / Sword of the Samurai 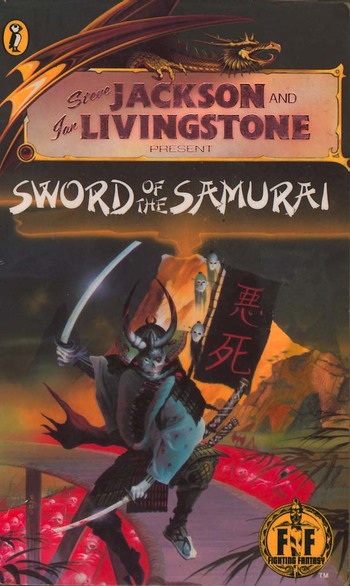 None shall pass!
Advertisement:

Sword of the Samurai is the 20th entry in the Fighting Fantasy series of Gamebooks, written by the combined effort of Mark Smith and Jamie Thompson, this time forfeiting the traditional European fantasy setting for something closer to Jidaigeki.

You are a samurai from Hachiman, in Khul, and you're the Shogun's champion. One day, you're summoned by your lord to complete a dangerous task: the kingdom of Hachiman is restless, many feudal lords are revolting against the Shogun and move war to each other, causing death and mayhem all over the country. Furthermore, dangerous beasts roam the land. All of this because the evil Master of Shadows Ikiru has stolen the Dai-Katana, the Singing Death, and is trying to use its secrets to rule over the land of Hachiman and beyond with his armies. It's your task to prevent this: you must venture forth towards Onikaru, the Pit of Demons, slay Ikiru and recover Singing Death, so that the Shogun may reaffirm his righteous rule.

This book is slightly different from most of the standard entries in some aspects: first, your character is bound by duty and Honour, and thus starts with three Honour Points, which can be increased along the way or decreased (If if drops to zero you have to commit seppuku). You can also choose one of four special skills (Kyu-jutsu, Iaijutsu, Ni-to Kenjutsu and Karumijutsu), which may come in handy during the quest. Finally, unlike many books from Livingstone, there are different paths to the end (though just as many, unexpected ways to have an instant death), which allows you to replay this book in different ways.

No relation at all with the videogame Sword of the Samurai.

Sword of the Samurai provides examples of: