Only Smart People May Pass 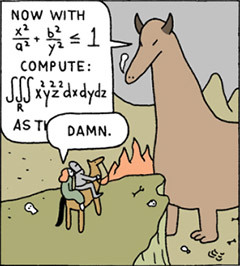 This refers to any barrier that requires the heroes to solve some kind of puzzle, Riddle or test of skill in order to pass. It is often given by Threshold Guardians (especially if the guardian in question is a Riddling Sphinx). You must be able to work it out based on the clues you are given on the spot.

It's often a defense against smart people who want to take whatever is being guarded like a Treasure Room. It can also be a Secret Handshake of sorts to only allow smart people inside like Mensa.

If you must come to it with some knowledge, it's Only the Knowledgable May Pass. Sometimes if those who tried to deploy that trope were clumsy, they gave you enough clues to make it this, and conversely, if the answer to this is too weird or insane, you may really need to know it in advance.

The architect must have deemed this a better barrier than say, a lock and key carried on someone's person instead of being in a chest elsewhere in the building. After all, keys can be stolen but knowledge is intangible. Unfortunately, this will not stop people who are evil in addition to smart or at least smart enough to trick the heroes into solving the puzzle for them.

See Block Puzzle, the various Stock Puzzles and Stock Videogame Puzzles, the Knights and Knaves puzzle and Solve the Soup Cans for examples of this. Note that the puzzle itself is often not terribly difficult; after all, the viewers have to be able to follow it (or solve it themselves, in a videogame.) This often leads to Fridge Logic about why it wasn't solved earlier or what the point of such a simple puzzle really was. Expect even the least smart of protagonists to be able to find a way to solve what was supposed to be an ingenious puzzle.

This trope dates back to at least the Sphinx in Greek Mythology, making it Older Than Feudalism.

Compare Only the Worthy May Pass, These Questions Three... and; also see First-Contact Math, and contrast Only Idiots May Pass. Subverted in Doom as Test Prize, where one of these turns out to be a way to dispose of people who are a bit too clever. As mentioned above, Riddling Sphinx is particular form of this. Life-or-Death Question may overlap with this, although in those cases, it's more like only the smart survive.