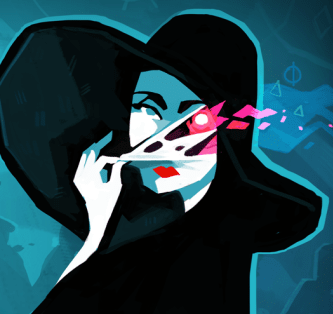 The Wood grows around the walls of the Mansus. As any student of Histories knows, the Mansus has no walls.

Cultist Simulator is a Simulation Game from Weather Factory, a studio founded by Alexis Kennedy, formerly of Failbetter Games.

The initial release was as a browser-based pre-alpha

, which was later expanded on. The game focuses on assembling a secret cult, delving into forbidden mysteries, and ultimately achieving some goal involving the Hours, eldritch entities that dwell in the Mansus. The browser-based pre-alpha required you to summon a Thirstly to destroy the city you were in, while you can survive the objectives of the current version with some work.

Gameplay is purposely obtuse and complicated, and the game is routinely based around experimenting and coming up with new questions, like any good cultist. The game is primarily a card game, where you have four stats: Health, Passion, Reason, and Funds. These stats can be used to do a number of things, and are used to interact with Tiles that represent different aspects of your life- studying, working, dreaming, and managing your cult. Your ultimate end goal is to find and uncover a "desire", and by completing said desire, you win the game. Adding tension to the mix is that the game is almost constantly ticking down, endlessly. If you can't support yourself in numerous ways from health to money, to sanity, then you die.

Sooner or later, every page receives the Tropes.

open/close all folders
A-F
G-O
The Wood grows around the walls of the Mansus. As any student of Histories knows, the Mansus has no walls.
P-Z
Advertisement: