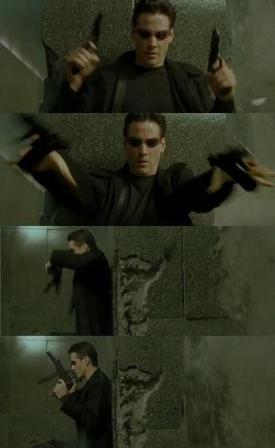 Looks like the pistols are out of ammo. Time to get automatic.
Mook 1: I have more bullets you know. You gotta stop doing that!
Mook 2: Yeah I know, it just looks so cool!
Mook 1: Well go get it!
Mook 2: ...Fine.
—The Venture Bros., "Escape to the House of Mummies Pt II"
Advertisement:

The habit of characters in action shows to simply throw away guns when they run out of ammunition during a gunfight. Even the poorest of combatants will dispose of a gun by dumping it as soon as it goes dry. The logic seems to be that it is more important to maintain a steady rate of fire than it is to conserve resources such as weapons. The characters tend to be a Walking Armory as justification, it's easier to switch to a new weapon than carry more ammo for any individual gun.

Of course, the gun will also get tossed away if it happens to jam, because in Hollywood there's no way to fix that.

This trope is to be expected when the weapons a character is using only have a single shot and/or take quite a long time to reload (such as crossbows, flintlock pistols and revolvers), especially in Period Pieces set in eras that came before the invention of automatic and semi-automatic weapons that can be reloaded much faster.

In real life this trope is sometimes called the New York Reload, and was once a common tactic with policemen, who would carry two revolvers to compensate for the limited number of shots and slow reload of their main service weapon.

May overlap with Trenchcoat Warfare for additional awesome. Compare and contrast Throwing Your Gun at the Enemy, where the purpose is as a last-ditch attack.