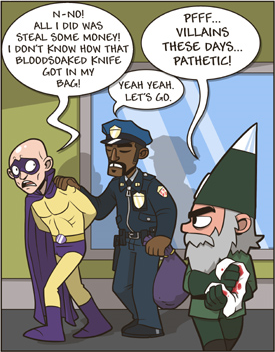 Tagon: Can we plead "that's not how we did it?"
Massey: Maybe you can ask for a recess while the defense runs around in a panic.
— Schlock Mercenary

When one comes across a Frame-Up, the usual assumption is that the victim of the frame is innocent. Sometimes, however, this is not the case.

Framing the Guilty Party usually takes one of four forms:

Unsurprisingly, while the first form can be considered Truth in Television (how true it is obviously depends on how corrupt your local police force and prosecuting counsel are), the second one is almost always pure fiction, often something of a Contrived Coincidence. If someone trying to frame themselves pulls it off, the character is typically on the way to Magnificent Bastard status, although there's always the risk that if the investigators don't fall for the fake frame-up (either by not realizing it's a frame in the first place, or realizing the frame was faked), the perp has provided evidence proving their own guilt, in which case it's more of What an Idiot!.

Compare Bluffing the Murderer/Engineered Public Confession, in which the evidence to convict the guilty party is created by somehow tricking them into doing something revealing rather than via a frame. See also: Frame-Up, for implicating the innocent with false evidence. Framing Yourself can also overlap with Sarcastic Confession. Someone who takes the frame at face value, and therefore suspects the guilty party, is Right for the Wrong Reasons. Contrasts Then Let Me Be Evil, the case when the framed party commits atrocities because they are framed.

WARNING! Although spoiler tags are used below, even the unspoiled mention of works could give away major developments. Proceed at your own risk!