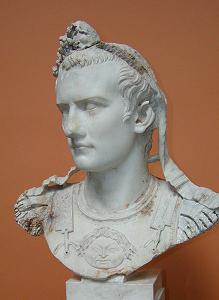 "Caligula was no boy scout,
He did things that we can't even talk about.
The Romans knew he'd lost his head,
When he filled a vacant senate seat with Mister Ed.
—Pinky and the Brain, A Meticulous Analysis of History

"Ita feri ut se mori sentiat." ("Strike so that he feels he is dying.")
Advertisement:

The infamous Roman emperor, reigned between AD 37 and AD 41. His actual name was Gaius Julius Caesar Germanicus; Caligula is a nickname, meaning "Little Boot" (or less literally "Bootsy"), that he got in his childhood, because, him being a Military Brat, his mom liked to dress him up as a soldier. His great-uncle was Emperor Tiberius, while his nephew was the equally infamous Nero. Caligula was elevated to emperor once Tiberius died in AD 37.

The first six months of his reign were reportedly an easygoing time for the Romans. Caligula was something of a PR maestro and knew how to put himself over: holding endless games, burning Tiberius' "enemies list", and showering gold coins (actually his inheritance) onto his fans. Later that year he fell seriously ill, the cause of which is still debated. Some suggest herpes or malaria (untreated malarial encephalitis causes extremely high fevers which are noted for causing brain damage in those who survive them) while others suggest lead poisoning.

All of Rome prayed for him to survive...

Upon recovering, Caligula had permanently lost his hair and apparently his mind. The popular image about him is of an insane tyrant. It's hard to find out how much of this is true, since hardly any contemporary sources survived about him. The outrageous tales about himnote  Specifically: committing incest with his sisters, sending his army against the sea after declaring war on the ocean god Neptune and having them stab the waves and collect shells as booty, marrying a woman who was 9 months pregnant so he wouldn't have to wait for an heir (whether or not it was his is unclear), using a tax hike upon the birth of his daughter

to provide gold for him to roll around in, and wanting to make his favorite horse a consul come from Suetonius, who wrote a biography about Caligula 80 years after his death at the behest of another dynasty of Emperors who had interest in demonizing their predecessors.note These particular dynasty being the Nerva-Antonines, initiated by the eponymous emperor Nerva (and whose successors until Marcus Aurelius were adopted instead of blood heirs). For that matter, Nerva himself was closely-associated with the shorter-yet-notable Flavians (consisting of the Parent-Child Team of Vespasian and his sons Titus and Domitian). The fact that nearly all of these Emperors were known to be very upstanding characters (praised by no lesser intellects as Niccolò Machiavelli and Edward Gibbon) helped contrast them with the relative lack of scruples of the Julio-Claudians.

What is certain that Caligula wanted to increase his authority, which made him unpopular with the Senate note the Kangaroo Court trials and subsequent executions of several public figures didn't help either, and that he engaged in some rather extravagant and occasionally questionable public and personal construction projects at a time when Rome experienced both an economic downturn and a brief faminenote The degree to which these events were related to said projects, or whether they simply painted his sometimes odd decisions in a poor light for the common Roman, remains unclear.

Said construction projects are a prime example of Caligula's complicated legacy: on the one hand, he enacted public works like improvements to several harbors during the famine (allowing increased food imports), expanding and upgrading the empire's road system, and initiating the construction of two new major aquaducts. On the other hand, he constructed of a pair of massive ships on a sacred lake

- the smaller one a floating temple to Diananote and/or the Egyptian goddess Isis, another apparent point of contention both among his critics at the time and among scholars today, the larger one lavishly equipped as a party barge (for purely ceremonial purposes related to the temple, of course).

There were several conspiracies against him, and he was eventually stabbed to death by his own bodyguards, who also killed his wife and infant daughter. He would be succeeded by his uncle Claudius, who ruled Rome from AD 41 to 54 before being succeeded by Nero.

Is the trope namer for The Caligula and Caligula's Horse. His life was the source material for the infamously controversial film Caligula, starring Malcolm McDowell in the title role.