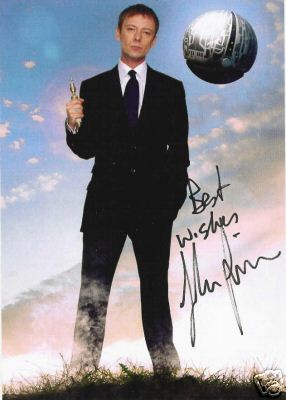 You are my voodoo child...
"You never undertake a project because you think other people will like it - because that way lies madness - but rather because you believe in it."
Advertisement:

John Ronald Simm (born 10 July 1970 in Leeds, England) is a British actor, most famous for being Seventies-trapped Woobie Sam Tyler in Life on Mars, a maniacal and hammy Master in Doctor Who and Intrepid Reporter Cal McCaffrey in State of Play. Other notable roles include Sexby in the English Civil War drama The Devil's Whore, Raskolnikov in a BBC adaptation of Crime and Punishment, and characters in the films Skellig and 24-Hour Party People (in the latter, playing Joy Division guitarist/New Order lead singer Bernard Sumner; Simm reprises his role in the music video for New Order's tie-in single "Here to Stay").

Still, The Mighty Boosh asks "Who the fuck is John Simm?"