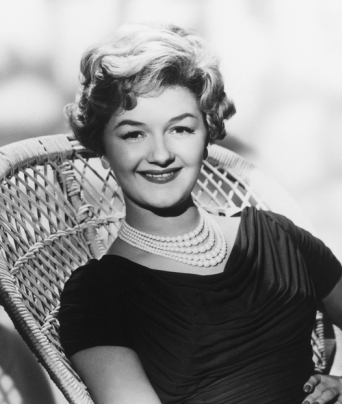 "To be a comic woman, you have to put up with quite a bit of banter. But I didn't mind. I've got a dirty sense of humour and I never found those things really offensive."
Advertisement:

Joan Sims, born Irene Joan Marion Sims (9 May 1930 — 27 June 2001) was an English film and television actress, mostly known for being a regular in the Carry On series and the TV show As Time Goes By.

She studied at the Royal Academy Of Dramatic Art in her early twenties, and then graduated in 1950, later gaining an appearance in a 1953 film titled Will Any Gentleman?, another film called Trouble In Store, and then appeared in Carry On Admiral, before being approached by the studio that made the box-office hit Carry On, Sergeant who wanted her to appear in their sequel Carry On Nurse. The two films soon became a part of one of the biggest franchises in British history called Carry On in which Sims appeared in 24 of the movies.

Between films, she joined Kenneth Williams on his radio show Stop Messing About in the late-1960s until 1970, then when the series finished in 1978, she appeared on television in shows such as Worzel Gummidge and Til Death Us Do Part, as well as a bit part in Doctor Who, Only Fools and Horses and The Goodies. Arguably, her other star-making role was As Time Goes By as Lionel's stepmother Madge, which was her last TV appearance.

Within her adult life, she became depressed and turned to alcohol when her mother, agent, and fellow Carry On colleague Hattie Jacques died within two years, but she claimed that she refused therapy and rehab in hope to get through her woes without anyone else's help, stating that she was the one that got herself in the state. Although eventually beating them, Joan's health worsened. In between appearing on As Time Goes By, she'd developed Bell's palsy and fractured her hip, but she got better, only to become comatose after operation complications in 2001, eventually dying in her state in hospital.