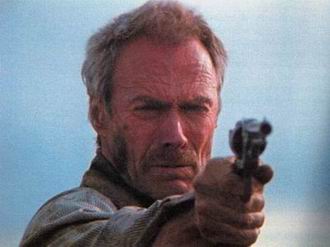 Go ahead, make his day.
"Eyes closed by the sun, yet sharp as a hawk."
— Mr. Fabian about Wyatt Earp, Tombstone
Advertisement:

Every once in a while actors think that they have to scrunch up their eyes while being on screen. Reasons for that are manifold, though it most commonly seems to be a way of increasing the badass level of the character they are playing. Squeezing your eyes together works like a focusing mechanism for the Death Glare. However, some actors seem to think of the Clint Squint as some sort of cheap way to add depth to a character (which is, of course, destined to fail).

In animation, where facial expressions are often either very broad or completely absent, a stoic character's choice of expressions can be basically limited to this (as everything else is either too emotionally open, or too subtle to convey).

Other reasons for squinting include:

The trope is named for Clint Eastwood. See also the Perpetual Frowner.