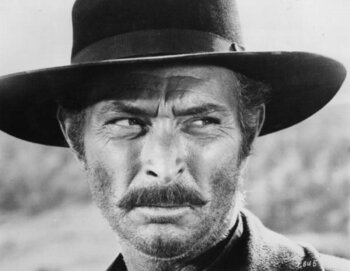 "A lot of actors think that the more words they have, the more attention they get. That's bullshit. I make people look at me. I don't have to say a lot of words."
Advertisement:

One of the first faces to come to mind when you think of the phrase "Western villain", Clarence Leroy Van Cleef (January 9, 1925 – December 16, 1989) began acting in theater, playing small off-Broadway roles until he was cast in a touring company of Mister Roberts. From there, Van Cleef started out in film as one of the villain's henchmen in High Noon (a bit part he apparently got because the director thought he had an evil-looking face) and went on playing mooks in various Westerns and films noirs during the 1950s. Then his career gradually fizzled out, partly because he'd injured his leg badly in a car accident but likely also because he had a drinking problem. In the mid-'60s, Sergio Leone resurrected Van Cleef's career by giving him major supporting roles in For a Few Dollars More and The Good, the Bad and the Ugly, which brought him to stardom in Europe. He continued to star in spaghetti westerns for much of his subsequent career.

Van Cleef reportedly claimed to be faster on the draw than Clint Eastwood in real life. A sequence at the climax of For a Few Dollars More shows him drawing, cocking and firing a gun in three frames of footage, which translates to roughly one-eighth of a second. He's also one of relatively few actors to appear in more than one movie on Mystery Science Theater 3000 (he was in both It Conquered the World and Master Ninja, the two 'movies' both being riffed on). He was missing the tip of his middle finger on his right hand, as a result of an attempt to make a playhouse for one of his daughters.

Of course, while he's most known for playing the main antagonist of The Good, the Bad and the Ugly, he's also played heroic (or at least sympathetic) characters on more than a few occasions, including For a Few Dollars More and most of the other spaghetti westerns he appeared in.

"But you know the pity is when I'm paid, I always follow my job through. You know that."
— The Good, the Bad and the Ugly