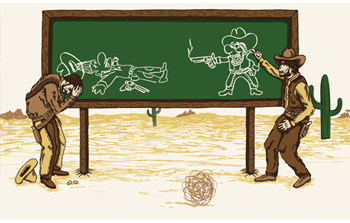 "There was a blur, and then shootin'. I didn't see no draw."
— Sheriff Root, Preacher
Advertisement:

The one-on-one gunfight is a derivation of the more ancient practice of duelling. Thus, a key characteristic of many gunfighters is their ability to field their weapon of choice with lightning speed. This is critical to their ability to deliver the Instant Death Bullet rather than receive it, although they may choose to blast the gun out of their adversary's hand.

This is not Truth in Television. There are few records of such fights ever happening, probably because without the mentioned Instant Death Bullet, being a split second faster will not save your life even if you are also accurate. This is instead a case where the fictional trope shaped popular understanding of history. Which of course led to it being expected in any genre work depicting said history.

Because the trope is so well evolved, there are many refinements. Guns and holsters are commonly altered to make the quick draw more effective. Subverting the quick draw by removing an adversary's ammunition before the showdown is a well-known ploy. Shooting from the hip is a way to improve the speed of the draw at the expense of accuracy. You may also have the firearm in an apparatus that sends it directly into your hand.

The Western Showdown at High Noon among shooters is the classic setting for this trope, but it can appear in pretty much every genre with guns, and the best of best at this game will often earn the title of Fastest Gun in the West.

The sword analog of this trope is the Iaijutsu Practitioner in a Single-Stroke Battle.

Once he puts the liquor away, The Waco Kid regains his old skill.

Once he puts the liquor away, The Waco Kid regains his old skill.