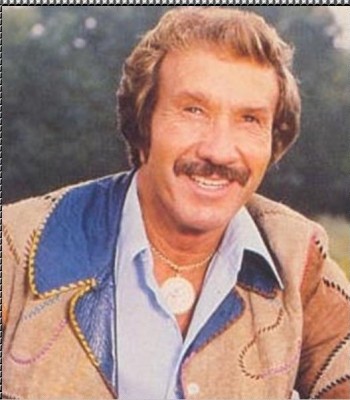 "Very simple song. God is asleep, before Creation [...] and gets the whim to wake, and decides it could be worth going through it all in order to be able to hear some music, and most of all, one of his best creations, Marty Robbins."
— Pete Townshend, explaining the song "God Speaks of Marty Robbins"
Advertisement:

Martin David Robinson (September 26, 1925 – December 8, 1982) was one of the more diverse Country Music artists. After working on his older brother's ranch in Phoenix, living as a hobo, serving in the Navy and teaching himself to play guitar. With some performances under his belt in the late 1940s, he finally signed to Columbia Records in 1951. Although his first two singles tanked, "Love Me or Leave Me Alone" went to number one and started a string of varied singles that lasted until his death in 1982.

Although his sound wasn't always mainstream, it was often innovative. Songs such as "El Paso" and "Big Iron" were known for their strong Western gunfighter imagery; "Devil Woman" had strong calypso overtones; "Don't Worry" was the first country song to use guitar distortion (albeit a happy accident); and so on. Robbins' vocal was more croon than twang, but he is still one of the most prominent singers in the genre.

Albums with their own page

To the page of Marty Robbins rode a troper one fine day...