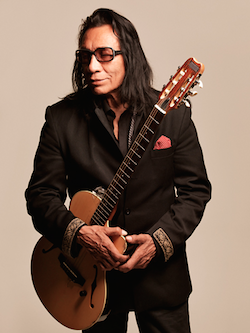 The enigmatic Sixto Diaz Rodriguez (born July 10, 1942), commonly referred to as simply Rodriguez, is a Detroit-based Folk Rock Singer-Songwriter who cut his teeth performing in various clubs and bars, building up a repertoire with haunting, acoustic-based songs with sharp lyrics of cynical social commentary. Thanks to friends and session players Dennis Coffey and Mike Theodore, Rodriguez eventually found his way to Clarence Avant, who made him the first signee of Sussex Records. Rodriguez recorded an album’s worth of material on an acoustic guitar, and was generously overdubbed with various psychedelic effects, strings, and other instruments. The result was Cold Fact.

... which pretty much made no commercial headway. A follow-up album, Coming From Reality, met a similar fate, and Rodriguez was dropped from the label. To make matters worse, it has since been alleged that Avant may have cheated Rodriguez out of royalties. At that point, he decided to hang up his guitar and start doing construction work to support his family, and even applying to go to university. To Rodriguez’ surprise, though, he was asked to do some concerts in Australia near the end of the 70s, coinciding with the rerelease of the album, and briefly enjoyed a resurgence of attention there, but it was soon back to Detroit to be a provider once more. But that was nothing compared to what came in 1998.

It turned out that, in the rough political climate of South Africa, many people there had embraced Rodriguez as an anti-establishment icon, considering him in the same esteem as people like Bob Dylan and Elvis Presley. The Academy Award winning documentary, Searching for Sugar Man, details the effort of some South African fans to find out what truly happened to Sixto Rodriguez, as he was long thought dead by suicide. As fate would have it, one of Rodriguez' three daughters stumbled upon a fan site those same fans put up in 1997, and she contacted them with the news that her father was, in fact, very much alive, which was a delightful surprise. One thing lead to another, and a concert tour of six shows was booked in South Africa, and was a huge success, leaving Rodriguez awestruck to find that he left a huge legacy after all.

The legend of Rodriguez continues to spread to this day, and he still tours once in a while, even taking his family on tour with him.

"Sugar Man, won’t you hurry? Because I’m tired of these scenes…"

"Thanks for keeping me alive!"