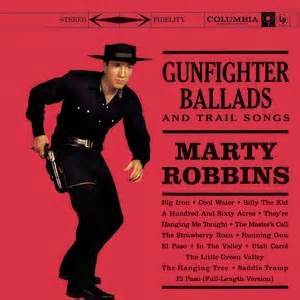 "What is a gunfighter ballad? You see, that’s not country-and-western. That’s cowboy music, or western music. That’s how the stories were related back in the early days of the American West, just like in England, you know. Stories were told by different people. News went around by word of mouth, and that’s the way the early American cowboy songs were done. Folk music is songs about what happened in this country, and your cowboy songs — that’s American folk music."
—Marty Robbins
Advertisement:

Marty Robbins' fifth and most famous album, 1959's Gunfighter Ballads and Trail Songs was, true to its title, a Concept Album of songs about The Wild West. Though Robbins had already made a name as a rockabilly (he was the first singer to cover "That's All Right") and country singer, Gunfighter Ballads was conceived as a folk album. The album's success, both critical and commercial, helped codify a shift in Country Music in general, helping to differentiate it from rock and roll even after outlaw country narrowed the musical differences. Several figures in the Cowpunk movement of the early eighties, especially Jefferey Lee Pierce of The Gun Club, have also cited the album as a direct influence.

The number one single "El Paso" won Robbins the inaugural Grammy award for Best Country/Western Song over the singer's insistence that it does not belong in the genre at all. The other single released from the album, "Big Iron", saw an uptick in popularity after its appearance in 2010's Fallout: New Vegas, where a notorious glitch caused it to play twice as often as expected.