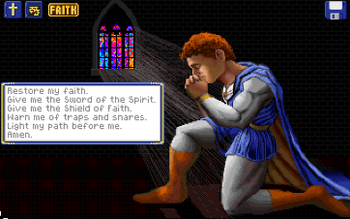 “If nothing else, I’m living proof of the power of God. Anything you think you see, anything you think I’ve done, understand where it comes from. I’m up here to say thank you to God for giving me this ability, for blessing me, for shaping me, for chastising me, for teaching me, for punishing me, for allowing me to be a vessel and touch people around the world.”
— Denzel Washington, American Film Institute Lifetime Achievement Award speech
Advertisement:

This character is a total badass and doesn't seem to answer to anyone. Oh, but he does. He devoutly follows none other than God Himself with much devotion. He studies the Good Book, he does what it says (unlike fanatical extremists, who often don't actually follow their own religious teachings despite claiming that they do), won't miss services, and is often deeply conservative. He is not necessarily Christian; his faith of choice varies widely depending on the setting, and how devout he is may vary — from strongly to painfully religious. Basically, even the toughest badass needs to have some hope and guidance through this life.

A subtrope is Badass Preacher, when said person is a religious leader. See also Religious Bruiser for when this is used as for the humor/shock value of their contrast, or Church Militant, when the real man fights for Jesus. Conversely, the Holy Hitman will quote As the Good Book Says... while he guns people down.

Compare and contrast Knight Templar, Well-Intentioned Extremist. After all, when you consider God to be your only authority, you're free to interpret orders however you like. Also has been known to overlap with Churchgoing Villain.

If the Lord Himself is acting like a badass, it may be Jesus Was Way Cool or Kung-Fu Jesus.